It's been a while in the making but we are delighted to introduce Joe's blog.  With twenty years experience competing at the best venues in Amateur Championships and my finger on the pulse with all that is happening in Ireland and The UK, I am well positioned to bring you some feature posts on all things golf and travel in Ireland and The UK.

I will publish a blog on the first and third week of every month and while these blogs will largely be based on golf travel, please forgive me if I use a little poetic license and wander into discussing some strictly golf-related topics from time to time. This first blog coincides with the commencement of The Irish Amateur Golf Championship season and hopefully conveys the prestige and esteem these venerable old championships are held in by the Irish Golfing Fraternity.

With a population of just 5 million people, the Island of Ireland has been punching above its weight in the golfing world for a number of years. Nine majors from Irish Golfers put Ireland comfortably in second place to the United States in Major victories in the 21st Century. A phenomenal achievement considering the playing population. So what’s the secret? Is it access to golf,  a temperate climate, great coaches, tradition, or plain old luck? The answer is quite likely none of the above. This tiny little island is blessed with championship venues dotted right along its coastline. The traditional links have proved to be the breeding ground of champions. With the West of Ireland the traditional season opener commencing this week when better to launch our blog?

Ireland is made up of four provinces which by and large are distinguished geographically. Ulster in The North, Munster in the South, Leinster in the East and Connacht in West. Each province runs their own championship and are appropriately named The North of Ireland Championship, The South of Ireland Championship with the same for the East and West. Allied to this the Golfing Union of Ireland run the Irish Amateur Open and Clos Championships. The provincial championships, however, have ancestral homes and are played at the same venues every year. The North at Royal Portrush, The South at Lahinch, The East in County Louth and The West at County Sligo affectionately known as Rosses Point. Before going on to win majors Rory McIlroy, Padraig Harrington, Darren Clarke, and Graeme McDowell all cut their teeth on these venerable courses. The Championships themselves are held in the highest esteem in Ireland and are steeped in tradition and history.

Host to the North of Ireland, Royal Portrush needs no introduction. In 2019 Royal Portrush will host The Open Championship for the second time. It is still the only Open Championship Venue on the island of Ireland and will no doubt be a superb venue. With a recent upgrade, the course looks spectacular and the closing stretch of holes from 16 to 18 including the treacherous par three 16, aptly named Calamity will have a big say in the Championship. A driveable par four to follow with a brute of a par four to finish Portrush will provide a strict examination of potential champions. Rory McIlroy shot 62 here in a North of Ireland Championship while Darren Clarke, Shane Lowry, and Garth McGimpsey are among it’s most famous winners.

Lahinch Golf Club has often been referred to as “The St. Andrews of Ireland”. Few would argue that it is Irish Golf’s spiritual home. A stunning golf course that will no doubt woo potential visitors when the World's media descends here for the Irish Open later this year. Holes 6, 7 and 8 are spectacular in their beauty with 6 and 7 being particularly tough. Darren Clarke, Graeme McDowell, and Paul McGinley all tasted success at Lahinch as South of Ireland Winners while Padraig Harrington was a beate, finalist.

County Louth Golf Club hosts the East of Ireland, which of the four provincial championships is the only 72 hole strokeplay championship. Without doubt, County Louth boasts the best set of par threes in Links Championship golf. Holes 5,7 and 15 are only medium to short irons yet can strike fear in the most accomplished golfer. The 17th is longer at circa 200yards off the tips and with the green bottlenecked by two bunkers, is no cakewalk either. Darren Clarke, Paul Dunne and Garth McGimpsey are among “The East’s” most famous winners, while Shane Lowry followed up an East of Ireland victory by winning an Irish Open as an amateur thereby securing his place on the European Tour.

County Sligo Golf Club hosts the West of Ireland Championship. Traditionally the season opener for Ireland’s amateurs and held at Easter, the championship has been brought forward this year to facilitate The Irish Amateur Open staging at the venue in May. The course will need a break between events. Holes 14 through to 17 has decided many championships with 17 in particular one of the toughest par fours in championship golf anywhere. 475 yars of the tips playing steeply uphill to a green with a false front, the natural amphitheatre that surrounds the green is always heavily populated by spectators keen to see the drama unfold. Rory McIlroy won here back to back as a 16 and 17 years old, while other famous winners include Padraig Harrington and Shane Lowry.

Caolan Rafferty and Ronan Mullarney are my tips for this year's edition of the "The West".

Thanks for taking the time out to read my new blog. Until a fortnights time - down the middle!

First Groups of 2019 have a ball!Having commenced business in 2018 by assisting clients who were let down by another operator, 2019 […]

Living the Dream I will be forever grateful to my Dad for the introduction to the game of golf. I am acutely […] 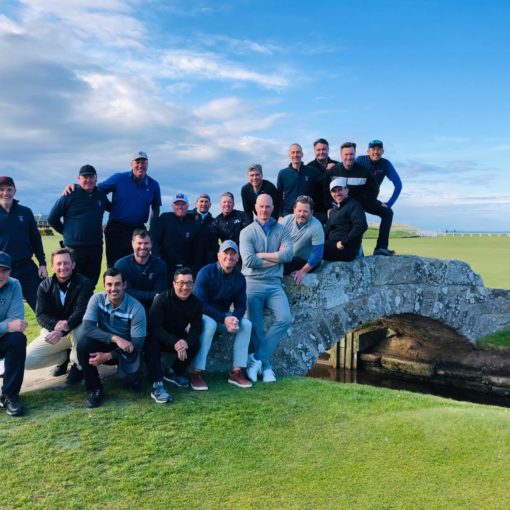